While we were in Florida, Mum bought a cheap t-shirt from the J Crew outlet. Unfortunately, she didn’t read the size properly, so managed to buy an XXS rather than the S that she was after. An XXS, as it happens, will fit me very nicely, so she offered the shirt to me.

The catch? It was pink.

I don’t really wear pink. But she followed up by saying it would become a duster if I didn’t want it, so I took it to see what I could do.

My main concern was the colour. I tend to wear blues or red, and I knew if I over-dyed it there was a good chance it would come out purple or dark pink. So I thought I could have a go with some Milton’s sterilising fluid to see what happened. Honestly? I was surprised at how well it worked. 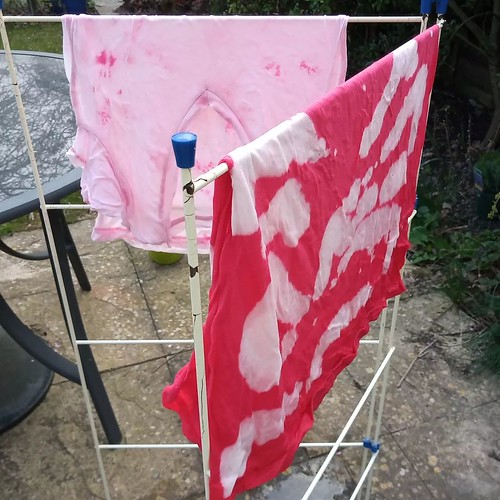 So keep that sterilising fluid well away from your clothes!

The other t-shirt on the rack there is a Lead Dev staff shirt from a number of years ago. It’s been in my reuse/fabric pile, but I shy away from it because of the colour. It’s a little bit pinker than the J Crew shirt originally was, but not a lot. I figured I’d dye both of them, and I just streaked that with the bleach to get a different effect on there.

Next I had to decide on the colour to over-dye them. Toss up between red and blue. In the end, I decided a purple/blue combo was better than a pink/red combo, and picked Dylon Ocean Blue (scroll down!). The machine pods dye 600g of dry material, so I also dyed our cushion covers and a white towel that Clarkie had found on a golf course. 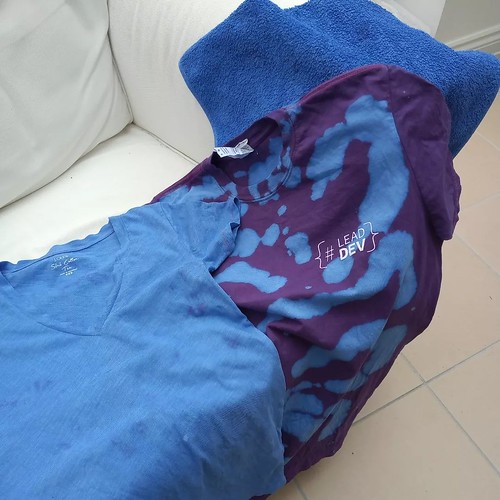 They came out well, I think. Very happy with the colour. The thread on the seams never dyes, because it’s not cotton. I can live with that.

My experience with those Dylon pods is that they dye pretty well, but sometimes leave darker spots. The towel and the cushion covers have those. The Lead Dev shirt is good to be cut up and re-used. But the v-neck had a couple of white spots, as though I hadn’t quite got all of the bleach out of the shirt before dyeing it. One of them is just visible in that picture and looked a bit like I’d spilled something down myself. So that meant I had to think of something to cover the spots.

In the end, I went with fabric spray paint. I had some gold left from another project, but no real idea what state it was in/how much was left. But first things first, I decided to add some cogs echoing my latest tattoo. I downloaded a pack of free vector cog designs from Vecteezy, and pieced them together to make a stencil pattern. 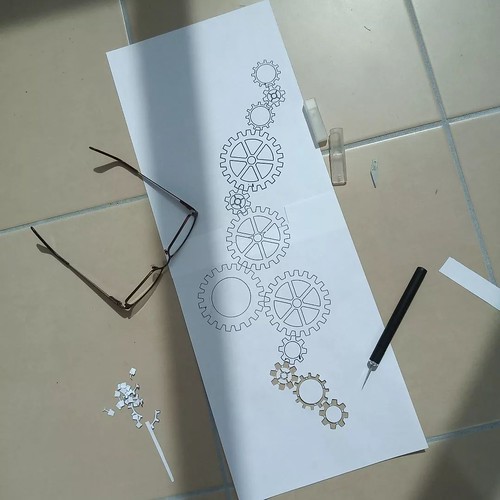 I was intending to copy this over to some proper stencil plastic, but I discovered that I only had one sheet left and needed two. So I decided to take a risk, and just use the paper I’d printed the pattern out onto. I figured this was a one shot anyway.

Took me a while to cut out the cogs, and I had to leave small sprues to keep the centre of the cogs in place. But I got them all cut out and stuck the pattern to the t-shirt with the spray on tacky stuff I have for stencils. Then it was spray and hope time – lots of shaking the can told me I didn’t have a lot left, and it had been sitting around for a while. 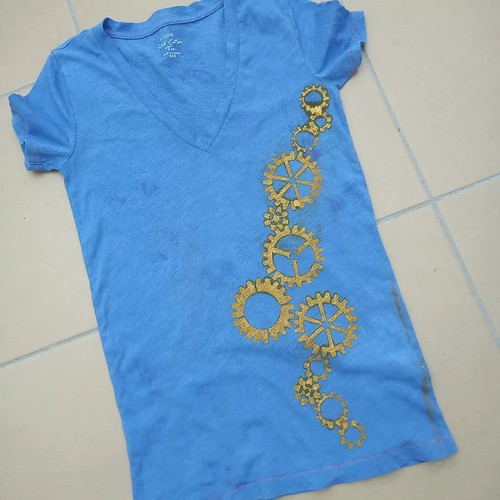 I’m happy with the result. It’s very imperfect. It’s slightly bled under the template, and in a couple of places it’s speckled slightly through. It’s splodged a bit in a couple of places too – I clearly didn’t quite shake it enough. And I’ve done my normal trick of not quite making sure the template covered all of the tshirt, so there’s a small stripe of gold on the bottom right (as you look at it) seam. But actually, all of those imperfections work, I think, especially with the slight mottling of the blue where the pink hasn’t entirely bleached out.

Better than a duster, anyway!